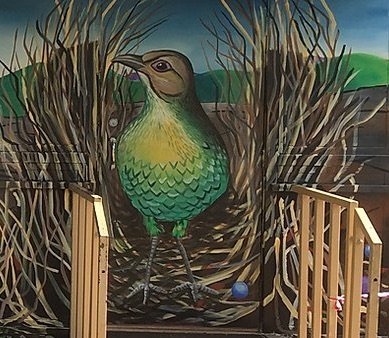 Sam Wortelhock left the UK in 1988 to travel to Australia, lured by stories of a primordial land and an ancient culture, and encouraged by a partner who had spent an idyllic childhood in Sydney.  But she found the city seemingly devoid of Aboriginality, yet the coastal landscape captivated her eager spirit and spoke of a hidden secret.

On the night of her 22nd birthday, she dreamt her first painting, Balance. It was to become the blueprint for a collection of art that has captivated, educated and inspired many disparate groups of people to look more closely into Aboriginality and the value of preserving our natural world.

Sam has been invited to take her art into remote communities by Tania Major, a Kokoberra woman from Cape York and Young Australian of the Year 2004, the Royal Flying Doctor Service (Aurukun), Queensland Health (Kowanyama) and the David Wirrpanda Foundation (Western Australia).

For two decades, Sam has worked with the NSW Education Department, travelling to schools to help ignite the imaginations of students and open them to the wonders of their culture and environment.

In between these commissions, Sam is kept busy painting fine art murals in schools, guided by the vision of the staff, pupils and the natural setting.

Let Ecolour be part of your next colourful project, jump online at ecolour.com.au or call us on 1300 326 568, we’re here to help.  For more about Sam’s work, head to Breakawayart.com.au.  Check out some of her fabulous work below.